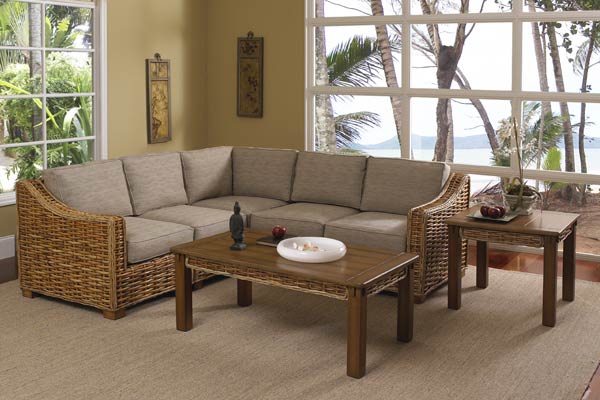 Worldly influences are part of mid-century modernism when it comes to architecture, interior design and furniture. Some styles can verge on retro or vintage while others are strikingly futuristic. Within a design period that encompassed the mid-1930s through the mid-1960s, and with its core lying from about 1955-1963, it is easy to see where those with a love of wicker can bring their favorite pieces into a mid-modern setting.

The phrase form follows function may very well have been derived from the evolution of modernist furniture. Designers, looking for new ways to express ideas from the German Bauhaus movement and Americanized International design conventions, turned to organic materials, turning them into art pieces that just happened to also be highly functional. Geo metrics without the look of Art Deco were popular alongside a distinctive lack of ornamentation.

Wood remained a popular choice for furniture, but plastics emerged on the scene with their own familiar characteristics. Molded into modern sculptural pieces, chairs and sofas displayed exaggerated lines along backs and arms with framework coming from chromed and polished steel. A little decadence also eased in with seating styles inspired by 1940s Hollywood Modern. These are among the curvy pieces that pair well with the straighter lines and angles of Danish Modern.

Designers popular throughout this period each had distinctive tastes that are still copied today. Such names as Eero Saarinen, Arne Jacobsen, the married Charles and Ray Eames duo, Harry Bertoia and Frank Lloyd Wright are among those on the revered original list.

The Many Color Palettes of Mid-Century Modernism

Black and white dominates the mid-century modern color space. Throughout the 1950s, this combo was a hot choice for ice cream parlors, of course, but today it still thrives in retro kitchens and themed home spaces. Add in a lot of chrome, and any space will jump up a level in personality.

Some will cringe at thoughts of burnt orange and avocado green, but a younger generation is having a look at those two shades of the times. In the mid-ranges, turquoise, pink and coral are hot, and bolder color choices include burgundy, dark brown and deeper blue.

Neutrals and naturals also work with an eye to stark contrasts. A sea of gray might include a spark of mustard yellow in a mod-style single chair, accent pillows and art. Classic beiges and browns work in a world all their own with their wide range of monochromatic hues.

Wicker That Works in Modernism

Modular wicker seating that keeps a low profile is just the right choice to slip into a mid-modern space. Outdoor pieces crafted from vinyl are perfect for indoor areas including sun rooms. Curvier styles should incorporate open frames with artfully shaped rattan insets that might arch or create opposing abstract straight-line patterns. Vine-wrapped lights and lamps add that lively air of styling that lies in between traditionalism and contemporary.

Generally, wicker furniture and accessory choices should create a sense of larger living spaces. Light and airy lofts are easy to decorate in this style, sun rooms make an excellent backdrop and darker spaces can always benefit from the dramatic choices of color, shape and texture options. Balance is also important in creating a mid-modern look. Smaller pieces with slender profiles and the minimized textural composition that plastics or resins can infuse should inhabit rooms limited in floor space and with lower ceilings.

For a final touch of authenticity, explore the meanings or interpretation behind each furniture and color choice. The spirit of mid-century modernism can easily thrive among other style choices with the right balance. 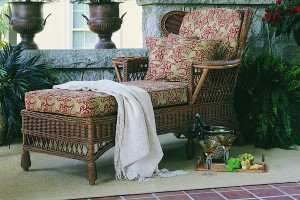 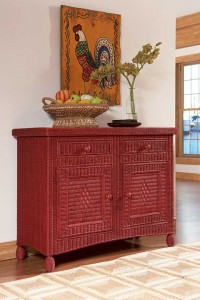